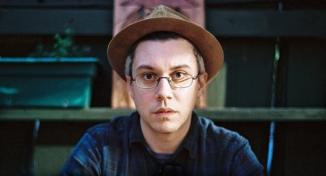 Dean Hurley talks to Third Of Never’s Jon Dawson about his new album “Philosophy of Beyond”, creating sound design for “Twin Peaks: The Return”, and running David Lynch’s recording studio.

Hurley also sheds light on Angelo Badalamenti’s participation in “The Return”, why he left Los Angeles, and the path that led him there.

For over 12 years, sound and music supervisor Dean Hurley has exclusively operated Asymmetrical Studio, director David Lynch’s own film-dubbing and recording studio in Los Angeles. He has collaborated closely with Lynch on a myriad of his film, commercial, and music projects, including most recently Showtime’s 18-episode Twin Peaks: The Return.

Hurley co-wrote and produced four full-length LPs with Lynch: The Air is on Fire (2007), This Train (2011), Crazy Clown Time (2011) and The Big Dream (2013) as well as serviced remixes for artists such as Duran Duran, Moby, and Danish musician Agnes Obel.

Hurley’s own music production has additionally extended to artists like Lykke Li, Dirty Beaches, Zola Jesus, and The Veils.